The campaigning organisation, River Action, has written to the new UK Prime Minister and Environment Secretary to congratulate them on their appointments and to urge them to take action to address the state of UK’s rivers. 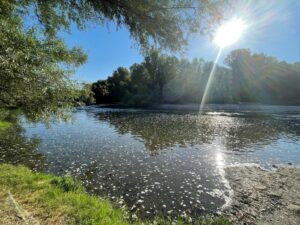 Last week we reported on the Environment Minister’s first day in office and his demand for water company chief executives to submit plans to make “significant improvements” to reduce sewage discharged into waterways within two weeks.

In their letter, River Action have set out the key drivers of the river crisis as they see it and the steps the new Government needs to take to address pollution. Below is an extract from the letter.

Some of the steps from River Action for the Government to follow in order to address river pollution:

Regarding his message to the water companies, the Minister, Ranil Jayawardena, said that the current approach is “not good enough”. Water companies have been given two week deadline to show how they will stop sewage being pumped into rivers and beaches.

Mr Jayawardena said “The volume of sewage spewed out by water companies is completely unacceptable, and the public have rightly shown their outrage. Yesterday, in my first day in office, I told water chief executives that it is not good enough, and I have instructed them to write to me formally by 21 September with a plan for how they will make significant improvements.” The statement in Parliament can be found in Hansard here.

The full letter from River Action can be read here.