The sheer scales in the growth of plastic usage is staggering. See this figure from CIEL, but simply Google Plastics growth images to get any number of graphs. We can see the polluting effects of plastics well enough now on every environment and innumerable species. Lots of this plastic is also going to get incinerated adding to global emissions. This is where the oil and gas industry see their growth – it is their plan B.  Client Earth are taking on this issue directly. 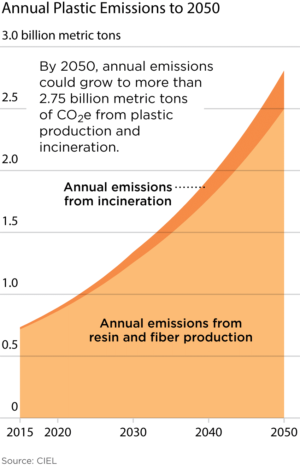 ‘Client Earth – Dipti Patel      ‘Petrochemicals giant Ineos has plans for a €3bn plastics plant expansion in Belgium. We’re taking legal action against the project, arguing that part of the project given the go-ahead without considering the potentially irreversible environmental and climate impact of the project as a whole.  While we caused initial delays to the project, Ineos was granted approval to destroy 55 hectares of woodland – home to protected wildlife – to make space for a plant which may never be built.  So we filed for an emergency injunction – and won. Together with 13 environmental organisations, our legal bid has temporarily blocked Ineos’s permit, saving habitats and wildlife from being destroyed until the permit for the whole project can be fully reviewed in court. As the EU aims to reduce carbon emissions and single-use plastics over the next decade, approving plans for large plastics projects would be a major misstep. We will continue to use legal action to block Ineos’s plans for this new site and we will keep you updated on our progress.