The impact of the Coronavirus has almost overnight largely decimated those companies reliant on high end products such as dive caught scallops, lobster and crab, whilst prices for the main finfish species have crashed.

The vast majority of crews on the small scale, under ten metre fleet are paid on a share basis and appear to be as economically vulnerable as those in the gig economy in relation to the financial support terms, or lack of them, announced by the government at the time of writing. Proportionally more crews in the over ten sector are employed on a wage, and therefore able to access financial support, but nevertheless, the lack of direct financial support to the self-employed is cause for concern irrespective of the size of vessel involved.

With boats landing to market prices falling by the moment, a strong landing of Pollack for instance crashing to £0.41 per kilo on Newlyn market having averaged around £4 in previous weeks, and with the skipper of one vessel landing a significant quantity of the species having leased quota at £0.50 per kilo to catch it in the first place, many boats are tying up rather than lose money. Merchants and processors, reflecting the loss of many export markets as well as reduced demand domestically, especially within the foodservice sector were reluctant to pay good money for fish that they may then get stuck with. To add to the problem, some processors sold off some of their frozen inventory to reduce their overheads, putting further downward pressure on prices. And to add insult to injury, many of the larger retailers, who had already reduced opening times for their fresh fish counters decided to close them altogether for lack of staff, and I guess the volatility of supplies.

First sale prices for a basket of species: 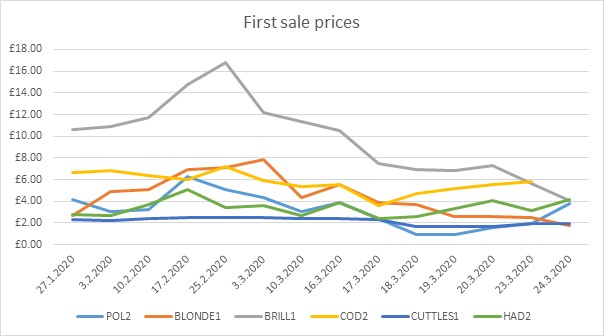 The graph above illustrates the reduction in first sale prices of an arbitrary range of species and sizes over the last couple of months. It is by no means scientific and ignores the quantities of fish landed by the day but does reflect the sort of landings from many inshore boats on the south coast.

The scale, speed and severity of the downturn in demand and therefore prices clearly came as a shock to many producers, processors and merchants, much of it driven by the loss of the primary market for fish in the UK, the foodservice sector. It is a fact that the home consumption of fresh fish in the UK has been falling for years, for a variety of reasons including changes in working practices, the availability of aptly named and highly processed convenience foods, including fish based products and a growing ignorance related to what to do to prepare a fresh fish. The old adage that the British consumer won’t touch anything with eyes or a pulse holds true for fish especially.

BUT, out of all this adversity has come an almost overnight change to the normal processes and supply chain logistics around the sale of fish to the UK consumer.

The demand for the established home delivery services of boxed fish has rocketed with supply struggling to keep pace with the rush of orders. Based in Plymouth, Sole of Discretion, supplier of ethically sourced fish delivered to your door by them or via some of the well known home delivery services has seen much increased demand and Pesky Fish in London whose ground breaking supply chain approach connects buyers with same day supplies direct from inshore boats has had hundreds of new domestic customers signing up with them every day.

This step change in domestic demand for high quality fresh fish has been matched in many areas by the increased custom at fishmongers across the country.  Although these changes are of little if any benefit to the producers of high end and expensive shellfish, for many of the boats in the UK fleet, it is or at least appears to be not only a lifeline in terms of keeping the boats at sea but hopefully the start of a renaissance of interest in the buying of fresh fish by households that have rarely if ever had the courage to buy fish that is not already covered in breadcrumbs.

At the same time, maritime based charities have stepped up their support to the fishing sector.

Recent studies commissioned by the leader in the field of maritime charities, Seafarers UK, had already identified the social, mental, economic and physical challenges faced by many within the inshore catching sector and they, along with the Fishermen’s Mission,  Fishmongers Company, the Seafarers Advice and Information Line and many other charities have risen to the increasing challenges faced by fishermen at this time.

As ever, the Seafish Industry Authority, is coordinating information and advice and signposting support for fishermen across the UK as well as feeding information to various government departments in regard to the specific challenges facing the fishing sector in its entirety.

DEFRA have created a Fisheries Covid-19 Industry Working Group to ensure that up to date intelligence across the entire panoply of the fishing industry is available to them and both Westminster and Scottish governments are apparently actively considering ways to support their share fishermen.  [NB: at the time of writing there are strong rumours of support for share fishermen and the self employed but nothing concrete as yet. We can only hope that the government comes good or we won’t have much of an inshore sector left post virus].

As part of the group, we have been lobbying government for a relaxation in relation to access to quota for shell fishermen unable to sell crab and lobster, a relaxation of the 30kg per day restriction on direct private sales by fishermen and a similar approach to allow fishermen to process and sell fish whilst ensuring safe and hygienic practices.

The main need for the catching sector remains a fair deal for all share fishermen and the self employed segment. In light of the recent requirements to avoid close contact, many boats will be forced to tie up as it is of course impossible to self isolate aboard ship or stay two metres away from each other!

In addition, a vast range of both local and national initiatives are underway or in development to meet the increasing demand for home delivered fish. These range from individual fishermen advertising on the internet through to larger cooperative approaches such as:

Seafood Cornwall – Fish to Door  with excellent advice for fishermen seeking to sell their own catch directly.

And of course, numerous fishmongers are turning to home deliveries as well as retaining well stocked shops.

Seafish together with DEFRA had launched their Sea for Yourself campaign in March of this year and whilst it may have been thought to have been unfortunate timing, it is in fact timely in underpinning the obviously increasing interest in buying and cooking fresh fish. In addition, processors are looking to provide more packaged fresh fish products for the chilled cabinets of major retailers and these will carry a link to the Seafish website for recipes and cooking advice.

So like almost every other element of UK industry, the fishing sector, right through the supply chain from net to plate is a mess of epic proportions and the effects of the pandemic will continue to have massive economic repercussions for the foreseeable future. In the meantime, many fishermen are battling on, still going to sea to land fish for what we can only hope is a rapidly expanding domestic market.