The approaches to sustainability take many named forms – One Planet Living – ICZM – The Ecosystems Approach. Government and in particular the Cabinet Office seem to have taken to a particular shine to another version ‘Resilience’. If you look at the diagram below based on Cutter et al. (2010), ‘Disaster Resilience Indicators for Benchmarking Baseline Conditions’, Journal of Homeland Security and Emergency Management, 7(1): 1-22  you will notice some strikingly familiar words. At the recent National Flood Forum conference in March 2014 many of the speakers used this diagram to illustrate their talks. No mention here of ‘Natural Capital’ or the ‘Ecosystem Approach’. No this comes straight from a long line of thinking in relation to major incident management going back as far as those ‘regional’ (don’t mention that word) resilience committees. BUT. Such is the influence of the Cabinet Office that Defra have felt compelled to introduce a resilience duty upon Ofwat in the Water Bill – and then explain the linkage to sustainability. I wonder at what point will we be able to operationalise  sustainability without inventing (reinventing) new words/approaches that represent the flavour of the month? 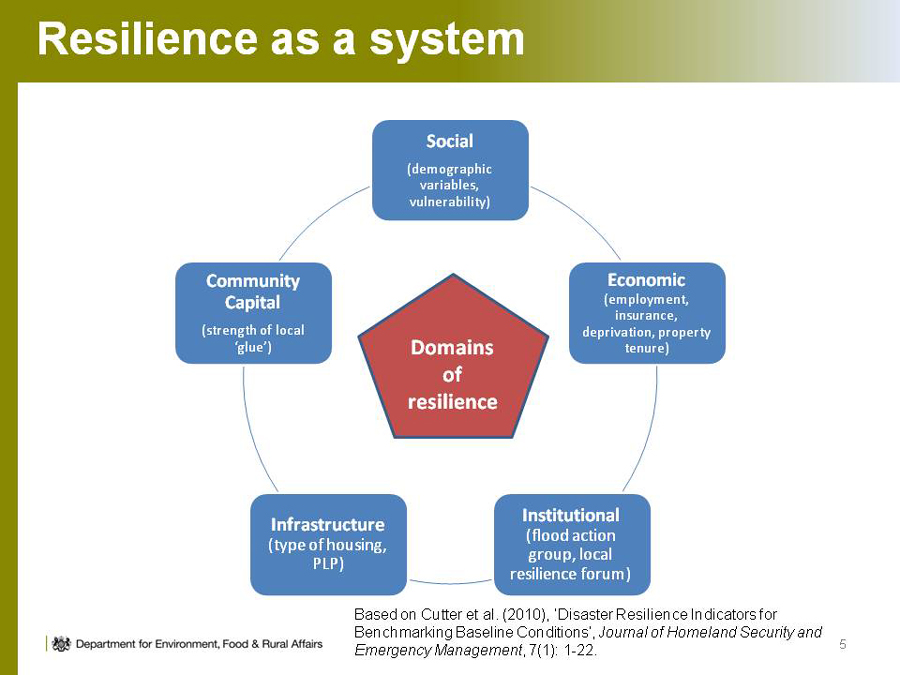 Mary Stevens of Defra developed this diagram with the following words …

‘Disaster Resilience is the ability of countries, communities and households to manage change, by maintaining or transforming living standards in the face of shocks or stresses – such as earthquakes, drought or violent conflict – without compromising their long-term prospects”. (DfID, 2011 p. 6)

What is resilience? in terms of relationships and processes rather than as a static characteristic of an individual, household, public service or community. In other words, resilience is not so much a response to the flood hazard itself, but is an emergent characteristic of the way in which the flood response and the subsequent recovery process are managed (Whittle et al., 2010:12).’